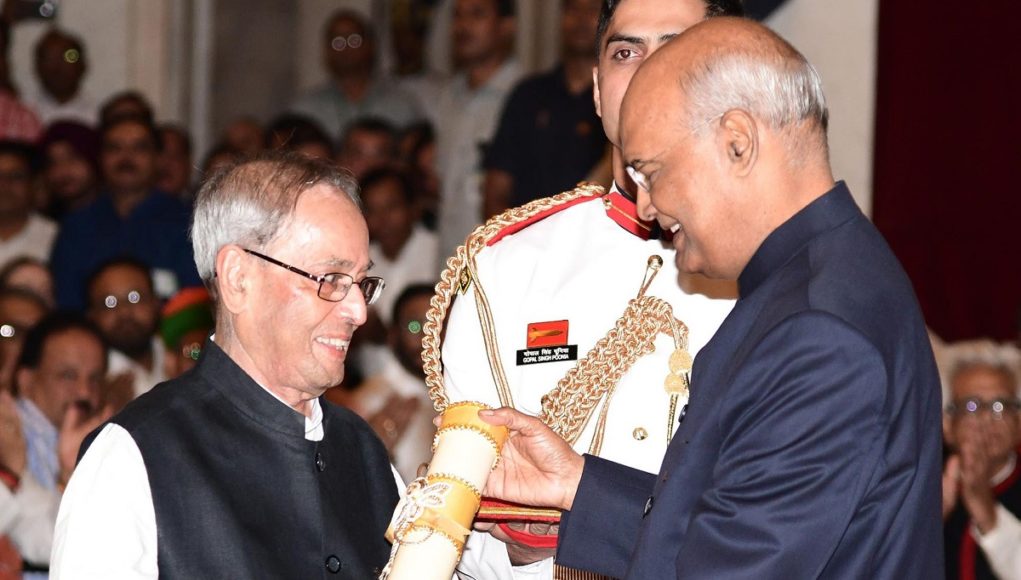 Bong community has hailed presentation of Bharat Ratna award to former President Pranab Kumar Mukherjee by his immediate successor Ram Nath Kovind at a ceremony held in the hallowed Rashtrapati Bhawan on August 8. India’s highest civilian honour after a gap of four years, was also awarded posthumously to Dr Bhupen Hazarika, legendary singer-composer, and eminent social reformer Nanaji Deshmukh. Bharat Ratna was first institutionalized in 1954. Mukherjee, 84, is the fifth Bong to have become recipient of the prestigious award in recognition of his exceptional service of the highest order in a field of human endeavour and public service.

Dr Bidhan Chandra Roy, maker of modern West Bengal, was the first recipient of the award from the eastern state in 1961 followed by Oscar winning film maker Satyajit Roy in 1992 , Dr Amartya Sen, eminent economist and Pandit Ravi Shankar, sitarist, winner of four Grammy awards , in 1999.Mukherjee, a erudite scholar in Sanskrit, political science and macro economics, also happens to be the fifth ex-President of India to have been honoured with the award.Pranab Mukherjee, born and grew up in rural West Bengal and having schooling through his mother-tongue, was inspired by his father to imbibe Congress ideology. During his chequered 5 decades of public life he was never forgetful of his humble background.

Blessed with sharp memory, the short statured and widely travelled personality was fondly called Pranabda across political spectrum. Then Prime Minister Indira Gandhi handpicked him in 1969 and got him elected to the Rajya Sabha. He not only remained loyal to her but also functioned as her eyes and ears.He had held several important portfolios under Indira Gandhi and, P V Narasimha Rao and Dr Manmohan Singh as Prime Ministers during his political career.

Prior to his election as President of India, Mukherjee was Union Finance Minister from 2009 to 2012. Following a meteoric rise, he became one of Gandhi’s most trusted lieutenants and a minister in her cabinet by 1973. During the controversial Internal Emergency of 1975–77, he was accused of looking the other way when gross excesses were committed. Mukherjee first became Finance Minister from 1982 to 84 till the demise Indira Gandhi. He was also Leader of the House in the Rajya Sabha from 1980 to 1985.

Mukherjee was sidelined by the Congress during the premiership of Rajiv Gandhi .As some political pundits say Mukherjee had viewed himself as the rightful successor to Indira Gandhi. Mukherjee lost out in the ensuing power struggle. He formed his own party, the Rashtriya Samajwadi Congress, which merged with the Congress in 1989 after reaching a consensus with Rajiv Gandhi. After Rajiv Gandhi’s assassination in 1991, Mukherjee’s political career revived when Prime Minister P. V. Narasimha Rao appointed him Planning Commission head in 1991 and foreign minister in 1995.

Following this, as elder statesman of the Congress, Mukherjee was instrumental in helping Sonia Gandhi head India’s oldest political party in 1998.In 2004, Mukherjee won a Lok Sabha seat for the first time in his political career from his native state. From then until his resignation in 2012, Mukherjee was practically number two in Prime Minister Manmohan Singh’s government. He held a number of key cabinet portfolios. These included Ministries of Defence (2004–06), External Affairs (2006–09) and Finance (2009–12) and had chaired several Groups of Ministers (GoMs) and functioned as Leader of the House in the Lok Sabha since PM Dr Manmohan Singh was member of the Rajya Sabha. His bonhomie with INC President Sonia Gandhi and some other Congress leaders started worsening before the end of his five-year tenure and he almost has become a persona non-grata for the party following his presence at a Rashtriya Swayamsevak Sangh abbreviated as RSS event in June 2018 at Nagpur with Mohan Bhagwat, its Sarsanghchalak (Chief).

The prime concern of COVID 19 is well taken care by BFC: The name justified

The Lost City of Dwarka