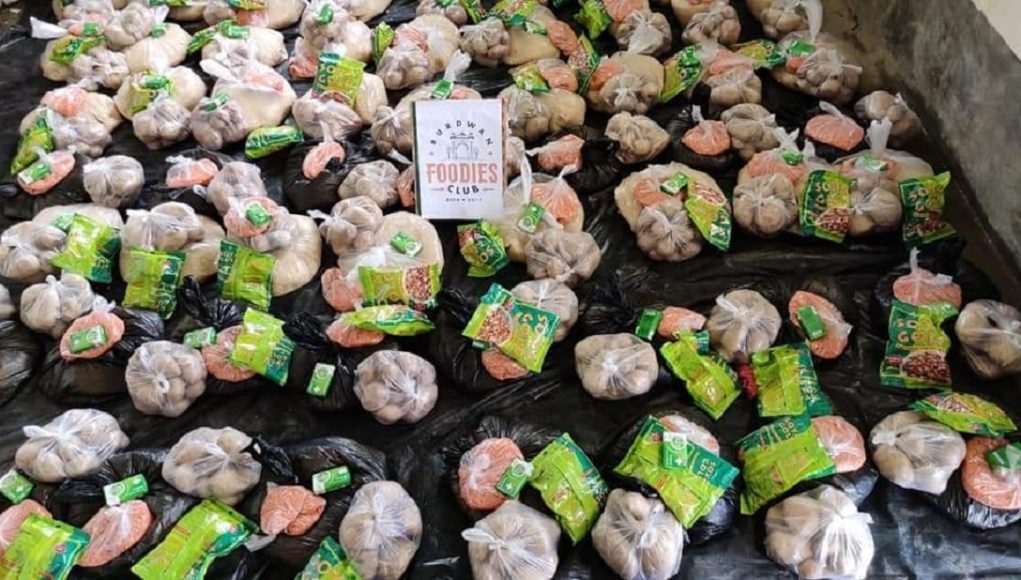 The two prime concerns, worldwide, of COVID 19 pandemic are – spread of the Corona virus causing death risks and the hunger of the poor people who are daily wagers. When there is no job which means no money, there will be no food, finally leading to life-death situation.

“Death across the world occurs due to malnutrition, hunger, lack of treatment, sex trafficking and many other reasons” Mainak Mukherjee -Founder, BFC

Burdwan Foodies Club, popularly known as BFC, has justified its name. Their food-program, education program and concern for the poor, have always kept them in the limelight. They have always worked for the poor whenever there was a need or a situation which needed ‘care’. BFC has always come forward irrespective of the cause or the concern or the geography. They remained ‘talk of the town’ for their work.

On 24 March 2020, the Government of India under Prime Minister Narendra Modi ordered a nationwide lockdown for 21 days, limiting movement of the entire 1.3 billion population of India as a preventive measure against the 2020 Corona Virus pandemic in India.

Since then this group is actively working and feeding hundreds of people on daily basis covering every corner of Burdwan. BFC has been distributing cooked food like Rice, Roti and Sabji (curry) to the poor people and daily wagers. Besides cooked food, BFC is also distributing ration items which include rice, pulses, soya bean, potato, oil, salt and some few.

During Corona Virus pandemic, BFC has gone two steps further. There was a need and they delivered, taking care, not only of Burdwan but beyond. Yes, they gone beyond Burdwan and serviced other districts with foods and other needed items.

They serviced areas beyond our national border too. Yes, they sent foods, rations items and other necessary items to Bangladesh, our neighbor. They did take well care of ‘hunger’ irrespective of cast, creed, culture and so-called national boundaries.

During this Corona Virus pandemic, spreading awareness about COVID-19, distributing masks to the needy people, educating people on Guidelines set by GOI & WHO and distributing sanitary napkins are also being done by BFC. Their awareness campaigns about #StayHome #StaySafe and #SocialDistancing did very well in the city.

It is a matter of surprise to know that BFC carrying out all these activities without any help from the local government bodies. Rather BFC is assisting local healthcare centers by ferrying affected people to the hospitals with their emergency Ambulance Service at free of cost.

First lockdown is over, second lock down is extended and we are, now, in third lock down stage. BFC is confident and determined to continue their services till the lock down period is ended. Their determination and confidence are boosted by the supports from the local people all across Burdwan. Truly speaking, local people strength is the real strength for any matter concerned for BFC.

They are still ‘on the job’ with one belief in minds – the new sun will rise amidst all the ills, the Pandora’s Box will also come up with new ray of hope, win over the Corona Virus would happen sooner than later and hundreds such beliefs.

It is true that the win over Corona is yet to be achieved but BFC has already won hearts of hundreds of people across globe. Wat-a-job done by Burdwan Foodies Club!

BFC conceptualized and founded by Mainak Mukherjee with other 5 founders with a very clear-cut vision in minds to make Burdwan ‘a hunger free place’. BFC is a registered organization (Regn No. 370/18) in the district of Burdwan, West Bengal, India.

Covid-19 Pandemic has completely wiped out the difference between rich and poor.

BFC started its journey in the year 2017, merely as a Facebook group with a very basic objective to minimize wastage of food and to take care of the ‘hunger’ of the people in Burdwan.

“We realized the hard-core reality of pecuniary hardship”

This group has phenomenally grown in the last 3 years with 190 premium members, 35 core committee members, 5 advisory members and with huge support of 85000 plus netizen, primarily from social media platforms. These members are from different walks of life, irrespective of cast, creed, culture and geography.

Disclaimer: Bong Haat Binodon has no role to promote and collect donations on behalf of anyone or any organization, whatsoever.

Remembering the youth icon, who asked us to dream