Home Interviews “We have invented “Vedanta” but we didn’t use it in our society”... 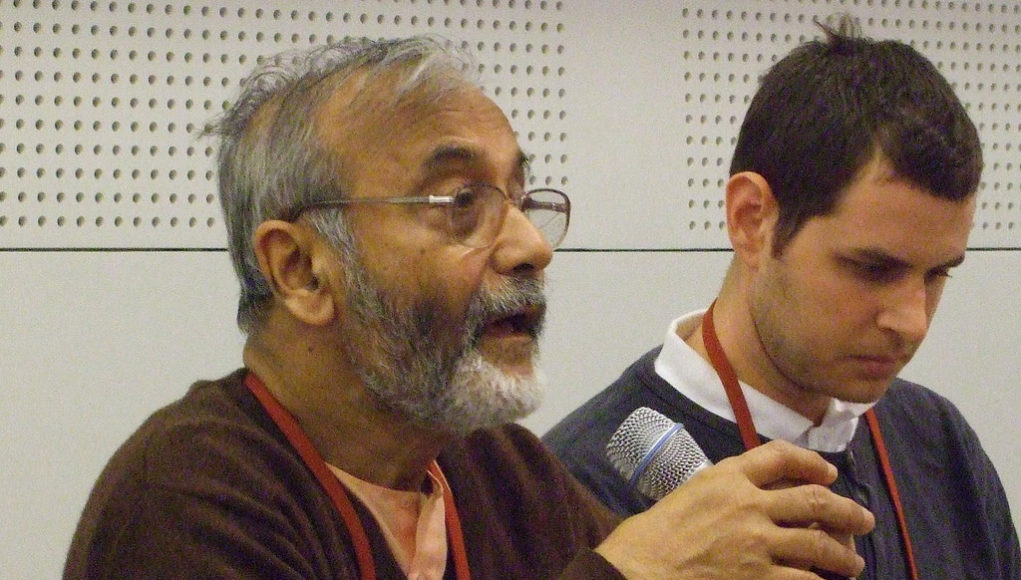 Swami Amarananda was born in Bengal in British India. He graduated in Civil Engineering (Kolkata) in 1962, and soon came in touch with his spiritual master Swami Madhavananda. He joined the Order of Ramakrishna in 1966. He was designated to supervise the restoration of the building where Swami Vivekananda lived and passed away in Belur, and participated four times in relief operations after disasters had happened in India. Thereafter, he was headmaster of a residential school for more than nine years; later, he assisted in management of a Home meant for providing food and lodging to poor students of the University of Calcutta. He was nominated as Assistant Minister, Centre Vedantique of France, in Sepember 1986. Since 25th January1989, he is the director of Centre Védantique of Geneva.

I have received a mesmerized thought of Vedanta, by “Maharaaj Amarananda Swamiji”- the Director of the Centre Védantique in Geneva.

Education in India before Independence:

Question: How far we have been able to communicate & convince the world that Indian ancient cultural was the ‘true way of life’?

Vedanta means the last section of the Vedas (the sacred books of the Hindus) or it may mean the ultimate knowledge. The Upanishads and the Brahma-Sutras are the basic texts of Vedanta. The Gita which is a part of the epic called Mahabharata, is considered a text containing the principal Vedantic points. Vedanta has undergone an evolution during the last four millenniums to become the principal element of what came to be known in course of time as Hinduism. But since the ninth century the Vedanta has increased its amplitude of influence and englobed all the other branches of Hinduism. From the doctrinal point of view, all the paths in Hinduism are but the difference nuances of Vedanta, within respective ritualistic particularities.

As long as you perceive the difference between Atma (self) and Anatma (non-self), you and your problems of life, death and rebirth are real.

According to the Vedanta, when a man has arrived at that perception, he has become free, and he is the only man who is fit to live in this world.

Vedanta accepts the laws of Karma, reincarnation and Kalpa (periodic creation, sustenance and dissolution of the universe). Vedantists hold that the soul is divine (either because of its identity with the Absolute in the Advaitic or monistic tradition, or because it is derived from the Eternal in the Dvaitic or dualistic tradition). In the language of Swami Vivekananda “the goal is to manifest this divinity within by controlling nature, external and internal. Do this either by work, or worship, or psychic control, or philosophy – by one, or more, or all of these – and be free. This is the whole of religion. Doctrines, or dogmas, or rituals, or books, or temples, or forms, are but secondary details.” Rightly has it been pointed out by Mr. J.-C. Demariaux in his book entitled Pour Comprendre l’Hindouisme: The Upanishads have always been a clean success in the West since the first translations in Latin done by the French orientalist A.-H.Anquetil-Duperron(1731-1805). They left an indelible influence on A. Schopenhauer. Historically, as a matter of fact, it is through the Upanishads that Europe has discovered Indian philosophy and wisdom.”

Vedanta does not say, “Give it up”: it says, “Transcend it.

Question: Cosmopolitan and mechanical lives of ours are ruining us, there is no deny of this fact. What do you advice the current generations?

Answer:See, we have to enlarge our mind and have to create a space to accept the enormous things from our world. We should not increase our greedy mind.

We all have the potential for greedy tendencies, but in people with a strong fear of lack or deprivation, Greed can become a dominant pattern.

But when your spiritual thought will increase your greediness will decrease. Definitely you will be a target oriented person. So, If you are ambitious, you are certainly not greedy. If you have a high level of cultivation, its powerful enough. That is why think big and live with your high thought to assist others. Because you are a part of your society and as a civilized member of your society you should maintain a beautiful atmosphere. You should not get trapped or you wouldn’t feel any suffocation between the Cosmopolitan and Mechanical thought of the process.

Question: How far has Swami Vivekananda’s dream ‘Bharot Abar Jogoto Sobhay Shrestha Ason Lobe’ been achieved, according to you?

India is one of the most religiously and ethnically diverse nations in the world, with some of the most deeply religious societies and cultures. Religion plays a central and definitive role in the life of many of its people.

In our country there, are some defects, but still, India is a well known country of oldest civilization in the world where people of many ethnic groups live together for years. India is a country of diverse civilization where people used of using almost 1650 spoken languages and dialects according to their religion and choice. In spite of being related from different cultures, traditions, religions and languages; people here respect each other and live together with lots of love and feeling of brotherhood. This is Our Country.

But as I have said before that we have done two defects: First: Though, we have invented The “Vedanta” but we didn’t use it in our society and Second: India’s caste system.

I have said before that we have done two defects: First: Though, we have invented The “Vedanta” but we didn’t use it in our society and Second: India’s caste system.

Question: What ‘mantra’ you would like to give to the human kind during this critical period of Corona Pandemic?

Question: “What Bengal thinks today, India thinks tomorrow”. How relevant this saying in today’s world according to you?

Mind it: It is all about your thought process, Shruti. As you know dear, the famous quote of Swami Vivekananda:- Arise, awake, sleep no more; within each of you there is the power to remove all wants and all miseries. Believe this, and that power will be manifested.

Question: How Ram Krishna Mission is changing lives of millions in Europe through its activities? How do people relate RKM philosophy in their day to day lives?

Answer: Indian culture is believed to be at least five thousand years old. It has been able to maintain unbroken continuity for such a long time, overcoming innumerable internal dissensions, many invasions by foreign hordes and two centuries of subjugation by the European power, mainly because of the spiritual vitality of the Hindu religious tradition which forms it’s living core.

The Hindu religious tradition itself is a vast and complex confederation of religions which has no founder, no defining creed, no centralized authority. Nevertheless, it has maintained overall coherence, vitality and far-reaching influence for many centuries, mainly because it is based on a dynamic philosophy of life known as Vedanta.

The unique feature of Indian culture is the spirit of religious. And at the end we have to remember Maa Sarada’s Speech : “If you want peace, my child, see nobody’s faults. See your own faults. Learn to make the world your own. No one is a stranger, my child. The world is yours.” “One suffers as a result of one’s own actions. So, instead of blaming others for such sufferings, one should pray to the Lord and depending entirely on His grace, try to bear them patiently and with forbearance under all circumstances”.

Vedanta is not a religious creed or dogma which people accept out of fear of divine wrath or human wrath. Vedanta represents the timeless quest of the human soul for the Eternal and the Infinite. It is the outcome of the enquirers conducted by the ancient sages of India into the mystery of life, mystery of death, mystery of consciousness, mystery of Existence -much like the philosophical speculate of ancient Greeks and the research conducted by modern scientists. But, unlike these Western thinkers who relied on external observations, the ancient Indian sages, known as Rishis, developed technique of inner concentration, collectively called Yoga. The transcendental knowledge gained by the Rishis through Yoga was transmitted through the disciples who gathered around them. The records of this transmission of knowledge came to be known as Upanishads. The concepts of the Upanishads, most of which were articulated by the sages between 1,000 B.C. and 300 B.C., were systematized in subsequent centuries to form the Vedanta philosophy. Vedanta thus stands for the body of eternal truths and laws of the spiritual world which are universal, just as the truths and laws of the physical world discovered by modern science are universal.

Bala Randho To Dekhi- a recipe contest to win 1000 worth of reward points...