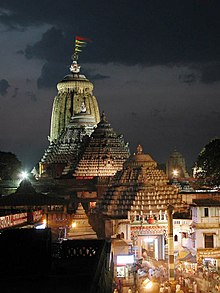 Sri Khsetra or Purushottam Khsetra or Neelachal Dham or Puri in whatever name you may call out as described in the Skanda Puran, Padma Puran, Bramha Puran or Markendya Puran, continue’s to be a place of mystic opulence through ages, often pushing the human mind both in devotee’s, travelers, historians about its primeval existence. Shri Krishna’s Bramha (Navel) did’nt burn when he was cremated by Arjun in Prabhas (Somnath – Gujrat) & it travelled to the eastern shores of Udra province ( as per Skanda Puran) where it assumed the form on Neelmadhav (4 armed Maha Vishnu) & was worshipped by Tribal Lord Bishwabasu in the Tiger Cave. Later through various circumstances & flow of events the Bramha found its place in the altar of Lord Jagannath. The event of Bramha transfer from one body to another is called Nabakalaber( Naba = New & Kalaber= Body). Hence if Sri Krishna is in Puri now then how can the Pandava’s be far way from him.

As per the Skanda Puran here are the manifestation of Pandava’s :

The Pancha Shivas are the Dwarpals in Puri & guarding them, reminding us of the Sri Krishna & Pandavas who fought for the establishment of Dharma in Dwapar Yug. Four of them are situated in the four corners of Puri while the fifth one is in the centre. The Pancha Shambu’s also accompany Lord Jagannath during the Chandan Yatra at Narendra Sarovar thus marking the same bonding they had during the Dwapar Yug. The five Shambhu’s or Pandavas also form a ring of Ashta (Eight) Shambhu’s guarding Puri.

However out of these Ashta Shambhu’s Sri Lokenath Mahadev (Bhim Sen) has a special duty assigned to him. He is the guardian or protector of Lord Jagannath’s Wealth at the Sri Jagannath Mandir. The history of Lokenath Mahadev as such goes back to Treta Yug, touching Sri Ram, Maa Sita & Sri Lakhsman. When the holy trio was roaming out of Ayodhya during their 14 year exile, they arrived at Neelachal Dham at stayed at the Sabar Palli. However Sri Ram who used to worship Shiva daily, could’nt find any Shiva Lingam, on seeing this situation the people of Sabar Palli gave him a Lau or Lauki, which Sri Ram used to make a Shiva Linga & Worship.

This Lingam hence came to be known as Laukinath or Lokenath & till date resides in the place where Sri Ram had installed the Lingam.

The rest of the three Shambhu’s apart from the Pandavas are Vata Loknath,Sankheswar & Vanambara Mahadev.

Taslima Nasreen compelled To Go Back From Aurangabad Airport