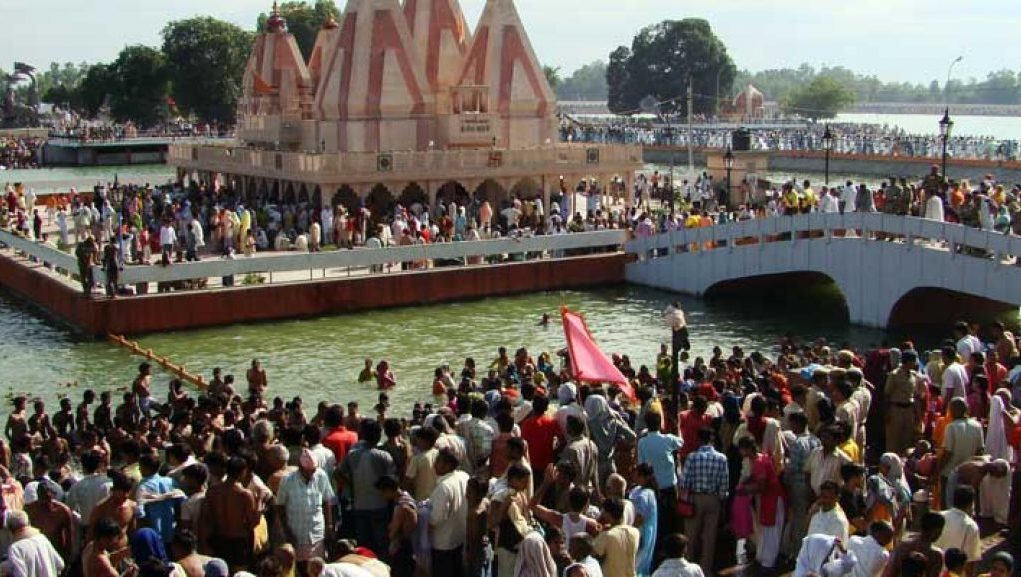 Through centuries, Kurukshetra has retained its magnetic spiritual pull for the devotee’s & people desirous to discover the Vedic Bharat Varsh & the Solar Eclipse at Kurukshetra is at the centre of this sacredness. On the eve of the Kurukshetra War there was a Solar Eclipse & as described in the Udyog Parva, Sri Krishna had decided that the battle would begin on the auspicious day of Jyestha Amavasya,

A solar eclipse day. As per Bhisma Parva both Solar & lunar Eclipse took place in the same month at an interval of 13 days, off course this does’nt cover the temporary solar eclipse that Sri Krishna had induced for facilitating the killing of Jayadrath by Arjun.

On the last Day of the War, among several inauspicious omens that was observed the eclipse was one of them. This is further corroborated in Satya Puran. Infact there has been a total of Eight Solar Eclipse which finds its mention in Mahabharata by Bramha Rishi Sri Ved Vyas, of which the last one is found in the Mausal Parva in Sri Krishna’s Dwarka before the complete annihilation of the Yadav’s & also acted as a precursor to the sinking of Sri Krishna’s Dwarka. This eight Solar Eclipse is also considered as the trigger point for Samrat Yudhistir to understand that time was ripe for Sri Krishna’s departure from this mortal world & for the Pandavas as well to surrender their Kingdom & leave for the Himalaya’s. This was exactly 36 years from Kurukshetra War.

It will be interesting to note that Sanjay while describing this Solar Eclipse to Dhritarashtra in the Bhisma Parva mentions the diametre’s of Rahu, Sun & the Moon to be 12000,10000 & 11000 Yojana’s which when calculated through the Rudimentary logic of Pi reveals the exact circumference of these planets, thereby clearly indicating that our forefathers had a clear understanding of the Solar system.

Starting from the Matsya, Skanda, Vaman & Padma Purans the Mahapunya that is achieved from a Solar Eclipse in Kurukshetra has been time & again mentioned.

The observance of bathing in the sacred pool of Shyamanta Panchak (Bramha Sarovar) on the occasion of the Solar Eclipse is an ancient pan-Indian institution. It rests on a well known legend. The Brahma Kundu was formed by the blood of Kshatriyas who were exterminated, for their ambition to dominate over the Brahmanas, by Parashurama one of the secondary Avatars of Vishnu who also did not scruple to kill his own mother in the cause of the eternal religion. For this reason the pool possesses the quality of freeing the bathers from all sin.

And this universal appeal had drawn leaders, monks & kings from all communities & we can recount those visits from Sri Krishna with his parents to Mughal Emperor Akbar with his court historian Abul Fazal, Guru Teg Bahadur, Guru Amar Das, Guru Nanak & few more.

The great Re-Union of Gopis with Sri Krishna happened also on the eve of one such solar eclipse when Sri Krishna & Balaram with their clan of Vrishni’s & parents Devaki & Vasudeva came to Kruskshetra & met with the herd from Nandgaon wherein Mother Yasoda & Nand Baba alongwith the Gopis wept & filled their eyes with the nectar of meeting their Kanha. It is said that seeing Lalla after so many years the same motherly affection of Yashoda lead to the flow of milk from her breats, such was their affection.

The Gopi’s having met their below Kanha cursed the creator for giving them eyelashes which was not giving them uninterrupted vision of Kanha. It’s here that the Gopi’s decided to end their lives as this second separation from Kanha was unbearable. This meeting also had the Kaurav & Pandav along with Bhisma, Guru Dronacharya, Bramha Rishi Ved Vyas & Sage Vishwamitra, Sage Narad & the other Saptarishi’s.

If the Readers are interested to know more on the previous 8 episodes published please visit # https://suryaroy1609.blogspot.com/

What an Adda SirJi ! Bong Moms on Rabindra Jayanti 1427 | Digitally and...

Bengali community leaves footprint of hope in every sphere of society

The Lost City of Dwarka