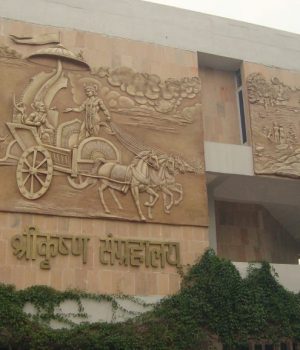 35 years had passed after the Epic Battle of Kurukshetra, Yudhistir was a Samrat now & flanked by the four brothers. It was then on one fine day Yudhistir a Master Astrologer & an expert in Science was baffled to see signs getting emittedhttps://suryaroy1609.blogspot.com/ from the horizon for a massive destruction & related evil indications.

Seeing this he easily understood something has happened in Dwarka & dispatched Arjun to Dwarka, but alas it was too late. However the point is the signals & indications that Samrat Yudhistir got, were the same which Sri Krishna got & he remembered Gandhari’s curse. All the Yadava clans of Dwaraka were killed in a fratricidal war. Sri Krishna, then decided to retreat to the forest for performing meditation.

Before that, he sent a message to Arjuna, asking him to proceed to Dwaraka, and escort the women and children to safety to Indraprastha. He also left a prophecy “This city of Dwaravati, after Arjuna’s departure, will, with its walls and edi_ces, be swallowed up by the ocean without any delay.”After Arjuna arrived at Dwaraka, he addressed the cheerless citizens and told them,“I shall take away with me the remnants of the Vrishnis and the Andhakas. The sea will soon engulf this city. Equip all your cars and place on them all your wealth. This Vajra (the grandson of Krishna – Vajranabha) will be your king at Shakraprastha (Indraprastha). On the seventh day from this, at sunrise, we shall set out. Make your preparations without delay.”

After all the residents of Dwaraka had set out on the seventh day, they looked back and saw the waters of the sea swirling through the streets of Dwaraka and submerging the entire city. The sinking of Dwaraka happened exactly the way it had been foretold!

Now let’s rewind some 80 years back to observe that Mathura City / Nagari was again & again attacked & laid siege by Magadh Raj Jarasandh to avenge his Son in Law Kangsha’s killing at the hands of Sri Krishna.

Although Sri Krishna & Balaram had repulsed the earlier 17 attacks on Mathura, but now they decided that they need to give peace to the residents of Mathura & Vrajbhumi from Jarasandh. That’s when the brothers decided to build the strategically located Dwarka in the midst of the Ocean.

The fabled city of Dwaraka (Dwaravati) was then established by the Sri Krishna and Balarama on the western coast of India, towards the close of the Dwapara Yuga. Dwaraka had been built at the site of an ancient city called Kusasthali, which was established by King Revata (a grandson of Manu).

Kusasthali was the capital of the Anarta kingdom, roughly corresponding to the state of northern Gujarat. The city had been flooded by the Sea, and remained unoccupied for some time. When Krishna and Balarama left Mathura and arrived at Kusasthali, they reclaimed 12 Yojanas (96 Sq. kms.) of land from the sea, and built Dwaraka.

In the Mahabharata, Krishna tells Yudisthira –  “It is because of the large number of gates which guarded the approach to Dwaraka that the city had been so named, for the term Dwaraka means the “Gated City” or the “City with many Gates”. The city was also called Suvarana Dwaraka (Golden Dwaraka) because of its many tall buildings covered in gold, and opulent palaces studded with precious gems.The ancient texts of Srimad Bhagwat Mahapuran, Vishnupuran, Padma Puran & Skanda Puran describes Dwaraka as a heavily fortified city having four main entrance gates, with wide roads, public squares, lakes and gardens. Since the city was built on the sea coast on reclaimed land, it was referred to as Varidurga i.e. “fort in water”.

While excavation at Dwarka started from 1963, it was the expedition of Prof. SR Rao in 1979 (Under ASI) which changed the landscape of the findings & revelations. Prof. Rao was so much moved by the findings & after connecting the dots he said at the end of the expedition that “Only the name board is missing.” He submitted a proposal to the Ministry of Culture in January 2000, that aimed at preserving the ‘underwater cultural heritage of India Dwarka’ and also promoting it as a pilgrimage-tourism center. His proposal, in three stages, was to cost Rs 14 crores. It is sad that the proposal was not taken up. The then Secretary, Ministry of Culture, visited Dwarka and promised help, but nothing has been heard so far.

In the project proposal, Rao writes, “The fort walls of the first town of Dwarka said to have been founded at Kusasthali in Bet Dwarka Island, have been traced on shore and in the sea and also dated by thermoluminescence dating method to 16th century BC.” According to him, the clue to the existence of ancient Dwarka near the modern town of Dwarka was found during archaeological excavation near the Sri Dwarkadhish temple in 1979-80. Eroded debris and pottery provided evidence of a port town destroyed by sea about 3,500 years ago. This evidence is what led to the early excavations in the Arabian Sea, near the mouth of the Gomati River, where the modern town of Dwarka stands. . Between 1983 and 1990, S.R.Rao’s team came across discoveries that cemented the existance of a submerged city.

In January 2007, the Underwater Archaeology Wing (UAW) of the Archaeological Survey of India (ASI) began excavations at Dwarka again. Dr.Alok Tripathi, Superintending Archaeologist, UAW, said the ancient underwater structures found in the Arabian Sea were yet to be identified. “We have to find out what they are. They are fragments. I would not like to call them a wall or a temple. They are part of some structure,” said Dr. Tripathi, himself a trained diver. Dr. Tripathi had said: “To study the antiquity of the site in a holistic manner, excavations are being conducted simultaneously both on land (Close to the Dwarakadhish Temple) and undersea so that finds from both the places can be co-related and analyzed scientifically.”

The Srimad Bhagtawam & other scriptures mentioned earlier is replete with accounts of how the original Dwarka looked like. Mahabharat says that Dwarka had 900,000 royal palaces, all constructed with crystal and silver and decorated with emeralds. The city was connected by an elaborate system of boulevards, roads, market places, assembly houses and temples. These legends have been etched into the Indian minds for so long that their authenticity is not questioned. Fortunately, due to the grace of the marine archaeological department of India, the childhood stories have come to be a reality to a great extent.

Marine archaeological explorations have thrown light on a number of structures of different shapes, stone anchors and other artefacts. The exploration has found sandstone walls, a grid of streets and remains of a sea port, some 70 feet beneath the sea. The evidence points to the fact of the existence of a city some 9,000 years ago. Also according to them this was one of the most important and busy ports during historical and medieval periods.

The Island of Bet Dwarka finds it’s origin to Rig Veda wherein it’s mentioned that Sri Vishnu killed the demon Shankhasura on this island Bet Dwarka, an island in the Arabian Sea off the coast of Dwarka. Considered the original residence of Krishna, Bet Dwarka was the old port during the ancient times of Krishna before the Okha port was developed in Dwarka. The temple built here is credited to the religious Guru Vallabhacharya of the “Pushtimarg Sampradaya”. Rice is the traditional offering here to the deity as it is believed that Sudama offered rice to his childhood friend Krishna. There are also smaller shrines on Bet Dwarka which are dedicated to Shiva, Vishnu, Hanuman and Devi. According to a legend,. There are temples of Vishnu in the incarnation of matsya, or fish. Other shrines here are of Rukmini, Trivikrama, Devaki, Radha, Lakshmi, Satyabhama, Jambavati, Lakshmi Narayan, and a few more deities of personalities from Mahabharat.

In the Indus Valley, the period between 4000 – 3500 BCE was a transitional phase between the Pre-Harappan culture and the early Harappan settlements. A number of archaeologists (G. Possehl, B.B.Lal) believe that the Ghaggar-Hakra River (Vedic Saraswati) began to dry up at around 3800 BCE and ceased to be a perennial river. This dovetails with the information in the Mahabharata which states that Sri Balaram had undertaken a pilgrimage along the River Saraswati when the Bharata War was in progress, and in some places he found the river disappearing underground, only to re-emerge at a different place. It must have been during this transitional epoch, therefore, that the Bharata War was fought, followed by the sinking of Dwaraka. Interestingly, the research carried out by a group of scientists suggests that fragments of a comet may have struck the Indian Ocean during this period and triggered a cataclysmic mega-tsunami with far-reaching consequences.

The radiocarbon dating of the Western Australian chevrons, provides a specific & scientifically computed date for the impact event 3700 BC which falls in the period of transition from the Dwapara Yuga to the Kali Yuga from 3976 BCE – 3676 BC. This provides a strong basis to estimate that the submergence of the legendary city of Dwaraka could have been precipitated by the same impact event, for the tsunami also reached the coast of India. In fact, the sinking of Dwarka may have been due to a combination of events. Apart from the tsunami waves, the meteor impact could have sent shock waves across the ocean Floor, triggering a land subsidence. Since Dwaraka was built on land reclaimed from the sea, it must have been susceptible to subsidence, thereby going down to the Ocean bed.

It was this Comet / Meteor that both Yudhistir & Sri Krishna saw coming from the Galaxy & calculated the impact time frame based on which both of them took their decisions as shared above. Sri Krishna well knew that this Comet would hit the earth mass & trigger wide spread Tsumani which would submerge the City. Interestingly if we consider this theory then it is to be noted that the Tsunami Waves travelled upto the ancient civilization of Mesopotamia & inundated & ravaged its City of Urs which was also a flourishing Port City like Dwarka. Infact this period can be considered as the Transition Phase between the Bronze Age (Dwapar Yug) to Iron Age (Kali Yug).

Thus came to end the Legend of Dwarka, A city so Opulent which was said to be built by Vishakarma & Moy Danav jointly, a city which was full of Gates & gems, rubies & sapphires, flourishing in Trade & guarded by the invincible Narayani Sea was the City of Dwarka, now rests beneath the India Ocean at Bet Dwarka.

If anyone is interested to know more details on this entire destruction phenomenon please feel free to email @ suryas.roy@gmail.com.

Best way to say ‘No’ to plastic is to say ‘Yes’ to Terracotta. This New Normal is here to stay

A Bong with a Band in Switzerland: That’s DJ Indra